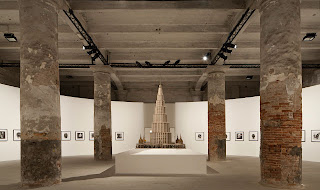 The Encyclopedic Palace at the Arsenale in Venice.
Francesco Galli, courtesy of La Biennale di Venezia


What a huge outpouring of love my grandfather’s architectural model has received from all over the world – from the time of the announcement that it would go to Venice for the Biennale, to its trip there, to its reassembly and unveiling in the Arsenale. The whole journey still seems like a miracle to me.

Here’s my attempt to bring together as many posts as possible about Marino Auriti and his great labor of love. First, the post I wrote in 2012 about the Encyclopedic Palace’s course from my grandfather’s garage to a storage locker in Delaware, where it languished for 22 years, to the American Folk Art Museum. And then the post about when we learned it would go to the Biennale.

Here’s a video from the American Folk Art Museum that shows the art handlers packing it up so carefully for its trip to Italy:

An eblast from the AFAM:

A lovely, thoughtful article, “The Museum of Babel,” by Stefany Anne Golberg in The Smart Set.

“The Backstory of the Venice Biennale,” by Leigh Anne Miller, who interviewed my sister Colette (aka Poogy) and me, and did such a great job with it – a joy to read.

An article by Alessia Gargiulo from a Milan-based website called Swide – with some zany typos and factual errors, but a nice piece nonetheless.

The American Folk Art Museum’s tumblr page about the Encyclopedic Palace at the Biennale.

Another tumblr page that someone set up.

A photo sent to me by Sandro Salvi, the mayor of Guardiagrele – a banner hung across an entrance to the town to welcome the cyclists of the Giro d’Italia: 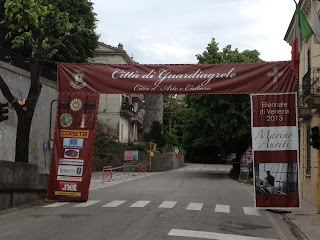 The many New York Times articles about the show and/or curator Massimiliano Gioni, with mentions of Marino’s work in just about all of them.

Something in Brazilian Vogue.

A mention in German Vogue.

Something on Gioni in Italian Vogue.

A mention in French Vogue.

An article from Style.com.

A talk with Gioni from Wmagazine.

A video with Guardian art critic Adrian Searle on the Biennale, with some great stuff about the Encyclopedic Palace toward the end – just before he lays down on a bench and cycles his legs in the air. Lovely! Somehow he reminds me of Mark E. Smith.

And this really cracked me up – “two ‘soft’ (Oldenburg-like) versions of Marino Auriti’s ‘Encyclopedic Palace of the World’” by Macau artist and architect Carlos Marreiros – who has clearly read his Rem Koolhass. With thanks to my talented and beautiful niece, Adrienne Fitzgerald, for finding that. 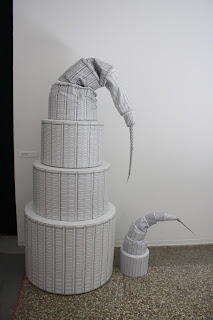