What Ever Happened to Francis Pollini? 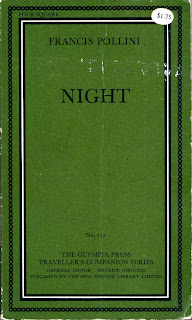 The first book by Francis Pollini I ever saw was a copy of Night in its Olympia Press Traveller’s Companion edition – those intriguing green paperbacks that always seem to hold the promise of great writing, a slap of European gravitas, and a tickle of something naughty.  The copy was in a used bookstore notorious for its creepy, Grinch-like owner (my husband once heard him order out of his store an old lady who, in the voice of a gentle lunatic, asked him if he’d enjoyed her Christmas cards) as well as for the promiscuity of its prices.  That copy of Night was $20, and when I opened up the book to look at it, its forty-year-old British spine went crack!
For years that was the only copy of Night I’d held in my hands, and the book’s obscurity made it all the more alluring.  Who was this Francis Pollini, with his Italian surname and all?  I knew that a lot of Olympia Press writers, whether writing erotica or “legit” literature, published under pen names, but the name didn’t sound made up in the way that, say, Akbar del Piombo did.  When I finally took home a copy of Night, its author information page was brief but promising:  Pollini was born in 1930 in Pennsylvania; he went to Penn State; he served in the Air Force; and since Night was published in Paris in 1960, he “has written two further major novels, Glover and Excursion.”  Further major novels, wot?  Even on the all-gathering web, there was – and still is – not so much ready information about Pollini.  Who was this fellow, and why did he fall off the map?
Night is set during the Korean War, after a group of American soldiers has surrendered to the Chinese and is marched into a POW camp.  Narrated, mostly, from the point of view of a Sergeant Marty Landi in close third-person – and intercut with italicized passages of interior monologue – the book follows Landi in his descent down the rabbit hole from resistant “reactionary” to dehumanized shell (and, perhaps, wretched informer).  Through sleep deprivation, constant fear, and subtle, nerve-racking interrogation mostly under the watchful, oddly kind eyes of a Communist officer named Ching, an elegant, polished man who speaks flawless English and who talks to Marty like a bright pupil who unfortunately doesn’t “work to ability,” Landi is broken down, and brainwashed (indeed, when the book was reissued by Houghton Mifflin it was subtitled A truthful novel about the nightmare called brainwashing).  There are situations that play out because of the differing degrees of indoctrination among the POWs; there are several episodes of outright violence; there are well-rendered pieces of dialogue using period-specific Commie jargon, sometimes with handfuls of POWs spewing it back, and some little comedy in a few Chinese characters talking like ESL students; but the trajectory of Marty’s disintegrating mind is pretty much the total scope of the book, and there’s virtually nothing resembling a subplot.

Houghton Mifflin, 1961.
The book begins with staccato, short-sentence narration, very limited description, and punchy, terse dialogue much like war movies of a certain era, but without the helpful visual cues that let the reader know what’s going on.  This shouldn’t be a liability; I love being thrown into a narrative and having to look sharp to assemble the story. (One of my favorite novels of the last few years, and perhaps of my lifetime, is David Grossman’s To the End of the Land, a book also shadowed by war, which begins with random voices in a contextless dark, and requires the reader to “work.”  To the End of the Land is so great a novel that it frustrates the ability to properly praise it – a problem that the axe-grinding writer of this uncharacteristically obtuse review in the NYRB obviously didn’t have.)  One expects such a narrative to open out from its cryptic beginning, and give the reader something she can hang onto, but I’m not sure that Night ever really does.  Once the book finds its feet, those feet just shuffle along.
There’s almost no scene-setting, little description, and no real “effects” in Night, no high highs and no low lows, just sensation rendered for the most part with a unspecific, hazy numbness.  It’s as if you’re reading the book through a fuzzy pinhole (Night is at least perfectly titled).  It’s a strange little hermetic document, a novel drained of all color and most every referent that would give it life.  On the surface, this sort of claustrophobia might be compelling in the way that the existential fictions we read in our teens were, especially given that Night takes place in a prison camp.  Instead, since the reader catches on pretty quickly that we’re slouching toward the inevitable brainwashing and/or betrayal, and because this is forever hanging in the close air of the book, there’s very little drama in the narrative.  There’s a feeling of static sameness to the proceedings.  The endless cat-and-mouse interrogation scenes between Ching and Marty are rendered very well and I think they’re the most compelling things about the book, but because there are so many of them and they’re so repetitious, any power they have at first has been shot to hell by the end of the book.
A huge problem with Night, I think, is its voice.  Because of the lack of tags and description, the reader spends too many early pages not sure whose close third-person narration she’s following.  Much worse, the point of view speedily breaks its own rules, leaving Marty and roving around inside the heads of other POWs.  (Such a thing seems to me a beginning writer’s mistake – and one that, after many clueless years, I’ve hopefully finally rid myself of – and usually comes from spending too much time writing in the first person and not knowing how to answer the dictates of the close third.)  There are little blips of this point-of-view problem at first but by the last third of the book it’s open season, and the particular flaw feels more and more ruinous as we spend time in the mind of another GI, Phillips, and, closer to the end, we zip from POW to POW, most of them just names, a few of them names attached to attitudes (usually noxious, sometimes in an interesting way – more on this later).  It’s as if Pollini got tired of the prolonged claustrophobia of his own book.
[Throughout Night I found the errors of a young writer who sees the story so clearly in his head that he’s shocked to learn that a reader might find it hard to access.  It’s all there, you moron! the writer wants to shout at her clueless reader, how can you be so dense?  It might be all there, but it’s frustratingly underwrought – which might be a side-effect (just a guess) of being influenced by the kind of lean, “masculine” prose that certain kinds of tough guys of the era wrote, while their chick counterparts nattered on about hairdos, pessaries, and Mary Quant.  A great writing teacher I once had would often use the phrase, of an imperfectly realized piece of writing, “It needs more dreaming.”  In this case, what we need here is less dreaming, and more articulation – more signposts, and more awareness that no matter the form or the style, one of the writer’s duties, as grating as this might be, is to communicate.]

John Calder, Ltd., 1961.
I wondered, finishing this book, what is the author writing toward?  If I believed this was his experience (which I somehow do not) would I be more taken with it?  What are his other books like?  There’s so much promise in Night, which was Pollini’s first book, and so little satisfaction delivered.  It’s one of those books that, if you were to go back and start reading it again, it would probably be much more clear and maybe incrementally more compelling the second time around.  And you could go back and read it again; or, gentle reader, you could read something else.
You could, in fact, hunt up another one of Pollini’s books, such as the signed copy of Dubonnet that I found at the Strand for eight bucks.  Which is what I’ll write about next time.
Finally, for no good reason, here’s a clip of Joan Sutherland singing Addio del passato.  I’m more of a La Divina fan, but La Stupenda was my mother’s favorite soprano.  Enjoy!
Posted by B.G. Firmani at 12:05 PM 2 comments: