The Encyclopedic Palace at the 2013 Biennale di Venezia

Friends!  I was so overwhelmed by the amazing news that the Encyclopedic Palace is not only going to the 2013 Venice Biennale but that they named the whole ever-loving Biennale after it – pinch me! – that it's only now that I can sit down and write about it with any kind of sense.
The back-story of the Encyclopedic Palace’s journey from the workshop of my grandfather, Marino Auriti, to a 22-year stay in a lonely storage locker in Newport, Delaware to, finally, the American Folk Art Museum can be found here on my blog.  For the press release from the Biennale in English, look here (“...the dream of universal, all-embracing knowledge crops up throughout history, as one that eccentrics like Auriti share with many other artists...”). 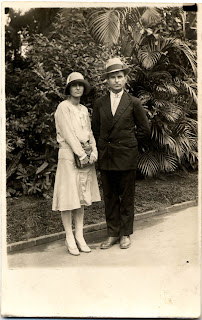 The way this thing has exploded all over the internet is still making my head spin – and I send out my thanks to all you kind strangers who have written about it. 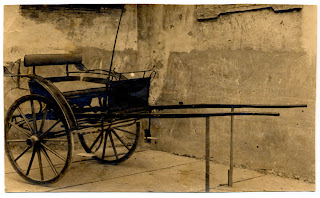 A carriage built by my grandfather in Guardiagrele, Italy. 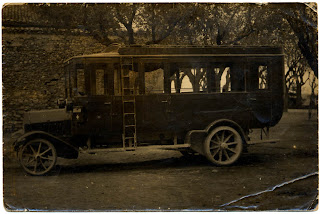 A mail truck built by my grandfather in Guardiagrele.
I remember my mother Colette being so proud of the breadth of
the rounds it made – I think it went between Pescara and Chieti,
but that seems pretty ambitious for the time.

My family and friends are all amazed and thrilled, and I’m still walking around smiling at the news.  And yet I’m also left wondering what my grandfather, who died in 1980, would have made of all this.  Would it have perplexed him?  After all, the Encyclopedic Palace that he built in his workshop was only a model, one step along the way toward an actual building.  As I was emailing to a young woman in Rome who’s writing her thesis on Simon Rodia of Watts Tower fame and my grandfather (will wonders never cease?), Marino Auriti might have been a dreamer, but he was also a pragmatist.  He wanted the Palazzo Enciclopedico built.  I imagine he thought “paper” architecture had its place, but that place had little to do with him.  Utopian though he might have been, I think he was much closer in spirit to a Buckminster Fuller than an Étienne-Louis Boullée. 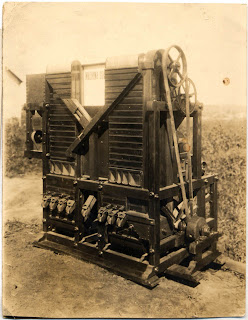 The coffee thresher designed by Marino Auriti and a partner
that would have produced untold wealth, so the story went,
had Marino’s partner not beat him to patent.
Or maybe my grandfather would have just been thrilled by the news.

Back in April of last year, Stacey Hollander at the American Folk Art Museum had hinted that the Encyclopedic Place might be going to the Biennale, but I didn’t want to get my hopes up.  I carried this in my mind for months, however, and in September, during the final days that the Encyclopedic Palace would be on display at the Folk Art Museum, I went up there to say goodbye to it.  Who knew what would happen to it – as far as I knew, it might go back into storage.  It was a crazy hot summer day, and when I got to the museum it was mostly empty.  I walked around the Encyclopedic Palace, smiling like mad, and then did something I hadn’t done since I was a child – I crouched down and looked through its tiny celluloid windows, into the building.  And I remembered how as a kid I was always outraged that it was empty inside.  I fully expected to see all of humankind’s inventions already in there, in perfect working order, each of them shrunk down to 1:400 scale. 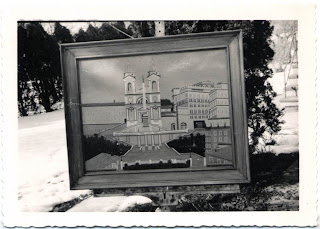 After I said my good-bye, I crossed the street to Lincoln Center, lay down on the hot grass on that lovely, tilty lawn by Diller Scofidio + Renfrew – itself as utopian a piece of architecture as you can find in New York City – and I thought about my grandfather and the nature of miracles. 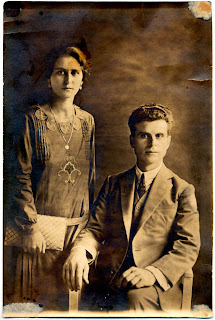 My grandparents.
Posted by B.G. Firmani at 10:03 PM No comments: